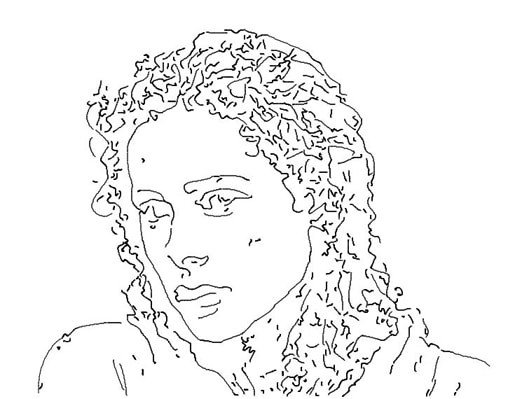 The example above is a bezier path edge rendition made from the raster image called ‘model’ in the ‘a few source images’ folder provided with Studio Artist. The bezier paths were generated from the source image by running the Path : Generate Paths : from Source Edges menu command. 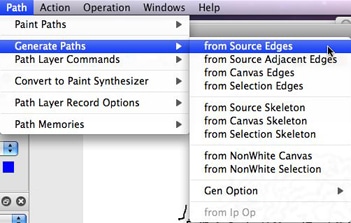 There are a large number of different Generate Paths menu options in addition to the one used above. Adjacent edges generate a bezier path on each side of an edge. Skeletons are bezier paths generated at the mid points between 2  edges, and are an attempt to represent the center spines of different image regions bounded by edges.

The NonWhite options are useful to convert a raster edge image into a set of associated bezier paths. For example, you might use some image operation or MSG preset to generate a black and white raster image edge rendition where the edges are black an the background is white. The NonWhite generate path options can then be used to convert than raster canvas image (or selection) into a set of associated bezier paths.

The Path : Path Layer Commands menus shown below provide a number of different tools that can be used to modify or enhance generated bezier edge renditions of sketches. 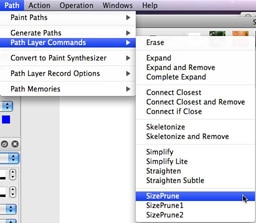 For example, running Size Prune , Connect if Close, and Simplify Lite menu commands on the initial bezier sketch of the model shown at the top of this tip results in the following set of bezier paths. Note how these modified bezier paths have a more stylized hand drawn appearance than the original set of bezier paths derived from the raster source image edges. 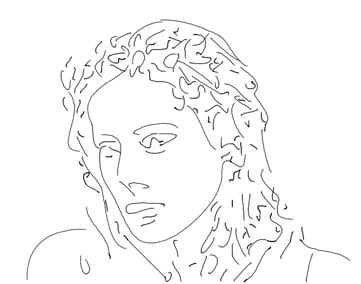 The Sketch Edge and Sketch Mass image operations are new to version 4 and can provide for a wide range of different sketch effects derived off of raster source images. While the normal operation of the 2 Sketch ip ops generate raster sketch images, as discussed above you can use the Path : Generate Paths : from Ip Op menu to generate a bezier path rendition of the associated Sketch effect.

The image below is a screen shot of a set of bezier paths generated using the Sketch Mass ip op and the Path : Generate Paths : from Ip Op menu command. 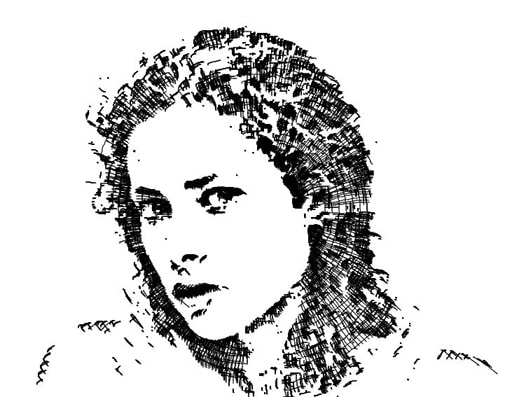 Once you have a set of bezier paths generated that represent a raster image, you can then paint in those paths using the paint synthesizer. This additional step allows for an infinite variety of different artistic styles to be created off of a given set of bezier paths. The bezier path images above are actual screen snaps of the canvas taken displaying the bezier paths when in Bezier operation mode. But you could generate identical raster canvas images by using a simple 1 pixel black line paint synthesizer preset.

For example, the image below shows a set of bezier paths generated using the Sketch Edge ip op displayed on top of a watercolor paint synthesizer rendition of those bezier paths.  A watercolor paint preset was initially selected and then used to paint the bezier paths by running the Path : Paint Paths : Full Layer menu command. This is an example of painting in a set of vector bezier paths with a raster paint effect into a raster canvas for raster image output. 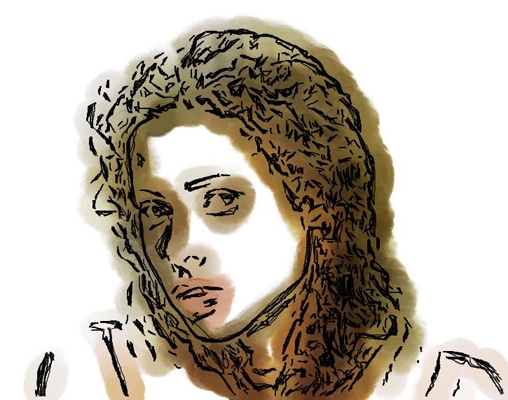 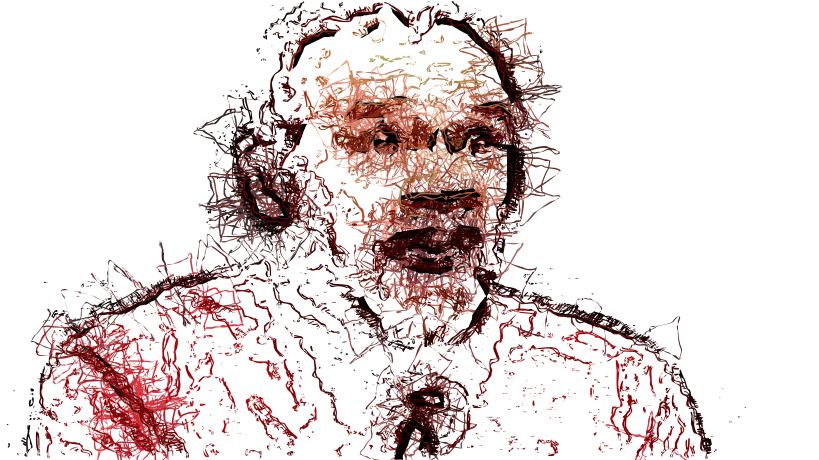 For example, the sketch image above is a vector eps sketch rendition of a raster source image of George Carlin. It was generated by first running the Path : Generate Paths:  from Source Images menu.  This generated a bezier edge sketch from the raster source image. That set of bezier paths was then painted in with the paint synthesizer by running the Path: Paint Paths : Full Layer menu command shown below.  This menu command paints in the set of bezier paths in the current layer’s bezier path frame using the current paint synthesizer settings.

For this particular example, i used a paint synthesizer preset that is capable of vector drawing and eps output of the associated vectors. Each bezier path is actually rendered as a bezier region by the paint synthesizer preset used for drawing the bezier paths, where the shape of the generated region defines a simulation of a paint or ink stroke that varies in width over the course of the path drawing. Because the final output was a vector eps file, the sketch is resolution independent and could be printed at extremely high resolutions or large print sizes if desired without losing any detail in the print.

When outputting vector artwork in Studio Artist 4 you can choose between eps, pdf, and svg vector formats. Note that in the example above the initial bezier paths have actually been converted into bezier shapes or regions that the user interprets as thick paint strokes in the final artistic rendition.

There are some additional tips that discuss generating and working with bezier paths and the various vector output formats.

For more information on generating EPS vector files, check out this tip.

For more information on generating and outputting SVG vector files, check out this tip.

For more information on the new Sketch image operation effects, checkout this tip.

For more information on things you can do with bezier paths in Studio Artist check out this tip.

To learn more about how to generate paint presets that do vector drawing check out this tip.

The Vectorizer is a completely different way to generate bezier region renditions of raster source images that was not discussed in this tip. For more information on the Vectorizer check out this tip.