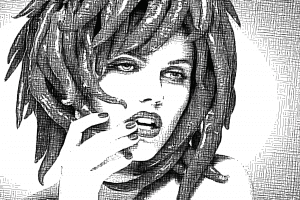 There are several Sketch image operations (ip ops) in Studio Artis. These sketch ops are sophisticated processing effects that can be used separately or together to build a wide range of different black and white sketch effects. The Sketch ip ops can either be used to directly create raster or vector sketch effects or to generate bezier paths that can then be used to drive the paint synthesizer.

Two powerful sketch types are called Sketch Edge and Sketch Mass. Sketched imagery is typically generated by using thin drawing strokes to build up a representation of a source image. Representing a source image in a sketch with line vs mass has been an established artistic technique since the days of Leonardo da Vinci. Line referring to the edge structure of the image (high spatial frequency). Mass referring to the underlying luminance structure of the image (low spatial frequency).

These 2 representational components are encapsulated into the Sketch Edge and Sketch Mass ip ops. Sketch Edge is primarily about generating sketches that representing edge structure in a source image. Sketch Mass is primarily about generating sketches that represent source luminance (or mass) via different hatching techniques. Both Sketch ip ops are capable of generating tight or loose or very abstract sketches of a given source, depending no how their editable parameters are adjusted.

The sketch example shown at the top of this tip was actually created with 2 different Sketch Mass presets min composited together.

The Sketch Edge Editor control panel is shown below. A radically large number of different sketch effects can be generated depending on how you adjust these editable parameters. 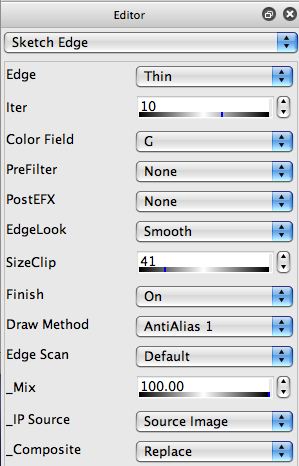 A processed example from the above Sketch Edge parameter settings is shown below. Note that these paramters generate a fairly tight representation. 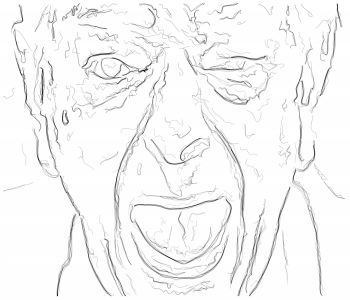 To loosen up the representation, a different EdgeLook can be chosen.

For example, changing the EdgeLook to Simplify Extreme will generate the following processed example, which has a looser visual appearance. 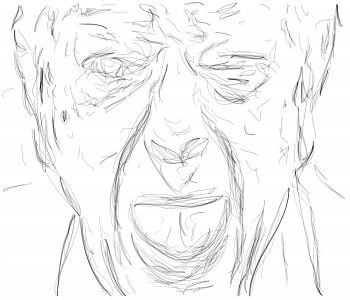 Depending on how you adjust the editable parameters you can radically change the visual appearance of the sketch effect, from very representational to very abstract. The example below is a very different rougher sketch style. 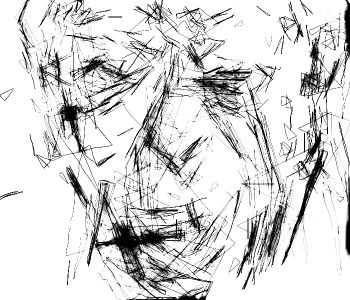 It was created with the following parameter changes.

The Smart Triangle Edge Look setting generates a fairly abstract sketch based on using sketched triangle shapes. The Bloom+Edge PostEFX setting in combination with the On1 Finish setting create the burned out stroke appearance, which is very different than the first 2 examples that have a smoother pencil sketch appearance to the line strokes that make up the sketch.

You can use the Colorize Ip Op to subtly colorize a black and white sketch with the colors from the source image. Here’s an example of a colorized version of the last black and white abstracted sketch effect. 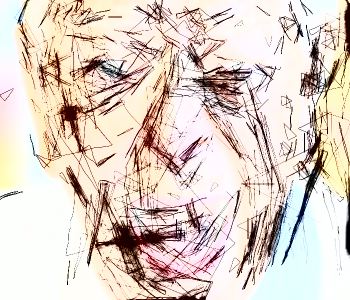 The Editor settings for the Colorize Ip Op used to generate the above colorized sketch are shown below. 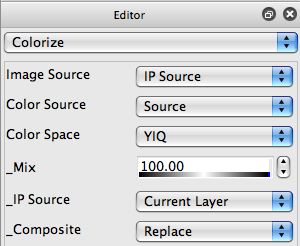 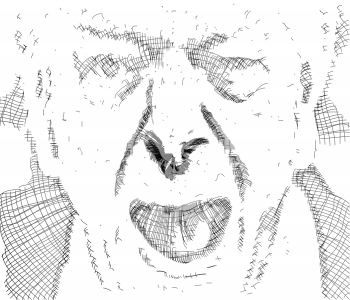 The Sketch Mass Ip Op can generate a large number of different sketch effects that try to represent the underlying mass of the source image being sketched. Since sketches are composed of thin lines, mass is represented using different hatching patterns. Sketch Mass can try to accurately reproduce source mass or luminance, or it can work in a more sophisticated way that mirrors how a human artist would try to represent positive and negative space in an image (as opposed to blindly reproducing luminance) which can lead to more natural looking sketch effects.

The example above was generated with the following Sketch Mass settings. The particular hatching pattern used in the sketch is generated by the BullsEye Hatch setting. 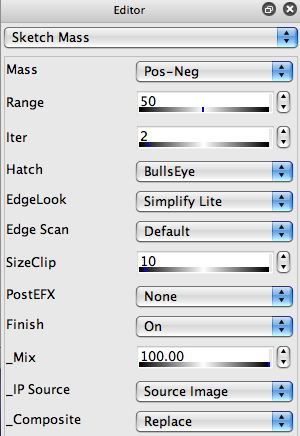 A looser sketch can be generated by changing the Hatch and EdgeLook settings, as shown below. 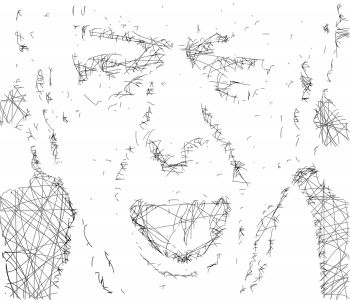 The following Hatch and EdgeLook setting changes were used to create the modified sketch above with the looser appearance.

Changing the Mass setting changes the way the effect models the source mass and can potentially change the appearance of the mass sketch quite a bit, as seen in the example below. 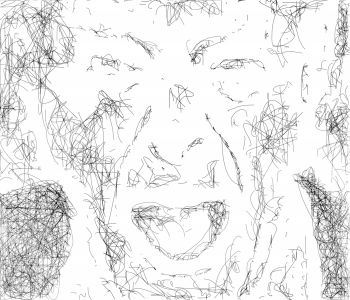 The settings for the example above are shown in the screen snap below. The Mass option was changed from Pos-Neg to SLA FixThres. The EdgeScan was changed from Default to Maximize Length. This new Edge Scan setting tries to maximize the length of the strokes by attaching adjacent ones, and you can see the results in the overall appearance of the sketch, which seems to have fewer sketch lines that are longer (as compared to the previous example). 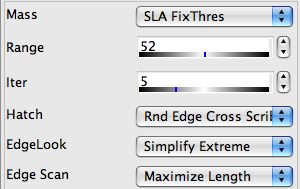 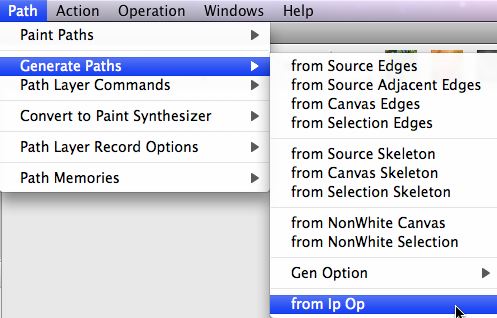 The generate paths from ip op menu command was a new feature in Version 4. Not every ip op offers this functionality, so if the current ip op is not one that offers an option to generate Bezier paths then the menu will be disabled.

Once you have generated a set of Bezier paths for your sketch effect, you can then use any paint synthesizer preset to draw them in an infinite variety of different paint styles. To do that you would first select the particular paint preset you wanted to use to draw in the Bezier paths associated with the sketch. You could then run the Path : Paint Paths : Full Layer menu command.

Studio Artist  paint synthesizer has a number of new vector output features. You can use these new vector paint features in conjunction with the Bezier path generation step discussed above to generate full vector output for your Sketch ip op effects. This can be especially useful for high resolution printing since SVG or PDF files are resolution independent and can therefore be scaled without any information loss for printing on very high resolution printers.

How to Erase the Canvas
Welcome to Studio Artist Tips!