Working with the Bezier Path Memories 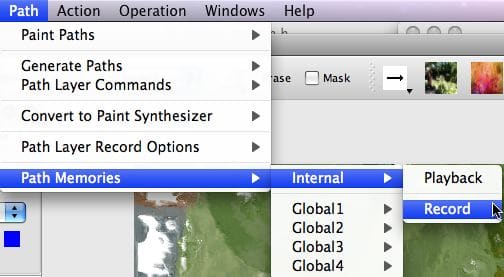 Studio Artist has 5 different Bezier Path Memories.  Four of them are global memories and one is internal to the paint synthesizer.  The bezier path memories can be used to record, store, and playback sets of bezier paths.

Each Studio Artist layer consists of a raster image buffer as well as a bezier path frame. The current layer’s bezier path frame is normally hidden from view but is displayed in the working canvas when you are in bezier operation mode.

There are 2 different ways to access the individual bezier path memories. As shown in the screen shot at the top of this post, you can use the Path : Path Memories menu commands to playback or record the contents of the one internal and 4 global path memories. You can also use the bezier memory toolbar located at the bottom of the bezier editor to access the path memories as memory buttons. 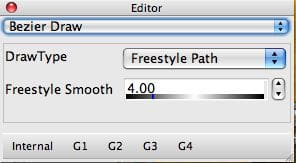 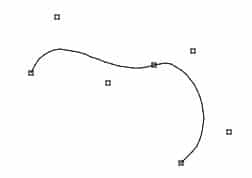 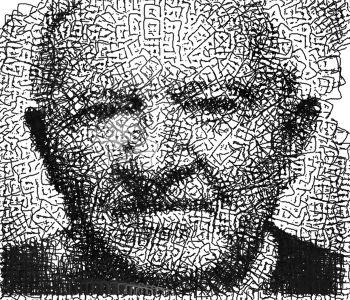 If you import the BezSmartHatch paint preset, switch to Bezier operation mode, and then click the internal path memory button at the bottom of the bezier editor palette,then the contents of the internal bezier path memory will be displayed in the working canvas. The screen shot below shows the 4 bezier paths that make up the set of bezier paths used for the cross hatch patterning generated by the paint preset. 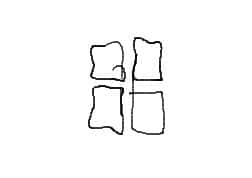 The paint preset is using an Internal Path Memory 1 path type in the path shape control panel (shown below). Because the Symmetry option is set to Sym the pattern will be repeated twice with a 180 degree angular offset. Changing the Symmetry option to Non Sym will get rid of the second pattern flip and just draw the set of bezier paths stored in the path memory. The path angle setting for the preset in the path angle control panel is set to Orient which means the angular orientation of the cross hatch patterns will track the source image orientation as the cross hatch sketch is drawn. 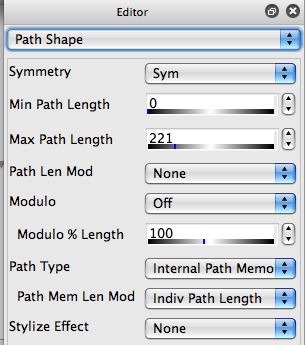 You can customize the cross hatch pattern any way you want by drawing your own set of bezier paths and then recording them in the internal bezier path memory. For example, i switched to bezier operation mode and then used bezier draw to create the following new circular spiral hatch pattern.

I then generated a new cross hatch sketch with the new custom hatch patterning i created.  To save a new preset with the custom bezier hatch pattern stored in the internal bezier path memory you can just export the modified paint preset. 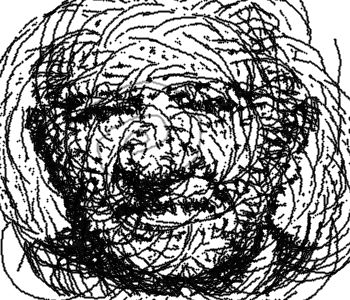 Answers to Common Getting Started Questions

How to Erase the Canvas