Working with a Wacom Pen and Tablet

Studio Artist provides extensive support for all of the features of Wacom pens and tablets. All Wacom pen tablets provide pen pressure modulation. As you press the pen into the tablet you can modulate paint parameters based on how hard you are pressing in while drawing. There is also a pen eraser tip that can be used to switch on the fly to a second eraser paint preset when painting.

The Intuos series of Wacom tablets also provide additional pen tilt and tilt orientation modulation. This gives you 2 additional degrees of interactive modulation based on how you hold and orient the pen while drawing.

The screen snap below shows a subsection of the many different modulation options available for the brush size modulation. 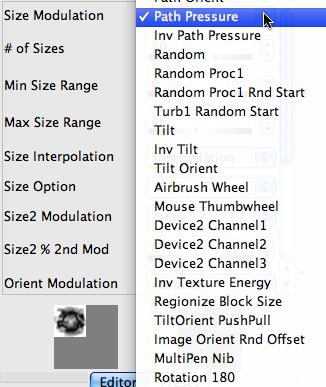 Device2, Channels 1,2,3 modulation options corresponds to the use of a second wacom device on an Intuos tablet. So you could be drawing with one hand and modulating paint parameters with a second Wacom device on the tablet. An example of a second controller could be the Intuos 4D mouse or a second pen.

The example discussed above are options available for the brush size modulation parameter. But there are a large number of different editable modulation parameters available throughout the paint synthesizer (over 450), and many of them contain interactive pen modulation options similar to those described above. Some factory presets may be configured to have many different editable parameters modulating at the same time based on pen pressure, tilt, tilt orientation, etc. This extreme editing flexibility enables you to create very responsive paint tools that simulate the kind of dynamic variation you see when painting or drawing with real world media.

The current eraser preset is stored in the paint synthesizer eraser memory. You can access the eraser menu using the ‘Edit : Paint Synthesizer : Pen Eraser’ menus. 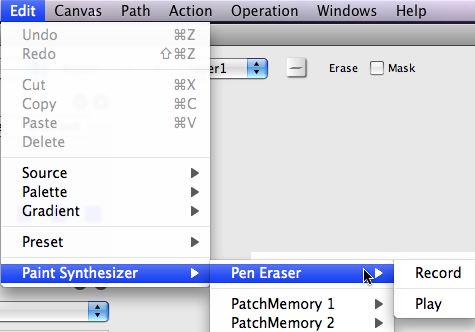 You can also use the e hotkey  to activate the eraser preset when drawing (as opposed to using a pen eraser tip). This is especially useful when drawing with a mouse.

The Wacom tablet has the ability to sense the presence of the pen as it hovers above the tablet surface before you touch the tip to the surface. This is called pen proximity. Obviously pen pressure modulation does not work when the pen is in proximity but not touching the tablet surface. However, the other interactive modulators like pen tilt, tilt orientation, rotation, air brush wheel etc all do work while the pen is hovering in proximity. This means you can use these interactive modulators while the paint synthesizer is auto drawing from an action command.

Pen proximity can also be used as a modulator for some paint synthesizer editable parameters. For example, the Pen Track parameter in the Time Particles 1 control panel works off of pen proximity.

Turning this parameter on give you the ability to control an attractive or repulsive force that is applied to the set of active time particles while the paint synthesizer is action drawing.

There are also path start generator options that will track the current pen position while the pen is hovering above the tablet in proximity.

The use of pen proximity modulation gives you the ability to interactively control action painting for artistic effect, to create live animations that could be spooled into an open movie stream, or for live visual performance.

Previous versions of Studio Artist included a Wacom source color mode in the Source Area. When using this source color mode, you could dynamically control the paint color using the wacom pen as you were painting. Version 4 does not have this option available in the Source Area. However, you can access the functionality in the Paint Source Color via specific Intuos modulators for the Color Mode parameter. 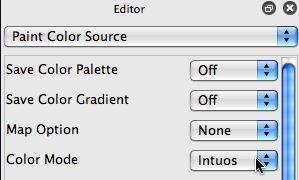 For example, the screen snap below shows that the AdvTurb processor’s Anistropy parameter has a pen pressure temporal generator modulating it.