This tip will discuss how to create a morph animation from a series of still images. Older versions of Studio Artist used the old Timeline Animation op mode functionality to generate morphs. Morphs are now created in v4 using a single Morph Context in a Paint Action Sequence.

How to generate a morph

To start off, open the Paint Action Sequence (PASeq) editor and erase the current PASeq by pressing the Erase button in the PASeq editor toolbar.

Choose the first source image you will be using for your morph sequence and open it as the current source. 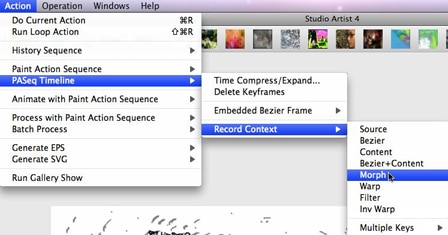 After running this menu command you will see a single Morph Context action step recorded in the PASeq editor.

Now switch to Bezier Draw operation mode. An easy way to do this is to use the Operation : Bezier : Bezier Draw menu.

Once you are in Bezier Draw op mode, you can draw in a series of Bezier paths that will anchor features in your source image.  Turning on the source onion skin is a good way to do this. Or you could drag the source image into the canvas if you wish.

For example, if you are morphing a series of faces, try drawing a series of Bezier paths around the facial features like the eyes, nose, mouth, and head. 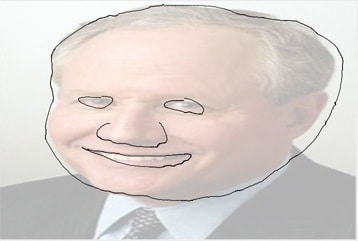 When you are done drawing your set of Bezier anchor paths, option click the first keyframe in the Morph Context action step in your PASeq Timeline.

Now choose your second image for your morph and open it as the source image. The onion skin will turn off when you open the new source image, so turn it on again. Now switch to Bezier Edit op mode.

Note how the original Bezier anchor paths are still displayed, but they no longer correspond to the facial features of your new source image. 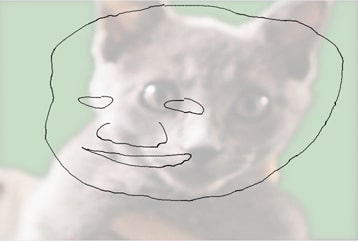 You now need to edit the existing Bezier paths so that they correspond to their associated facial features in the new source image you just loaded. An easy way to do this is to use the new e hotkey function available in Bezier Edit.

First select a single Bezier path. Then hold down the e hotkey and redraw the selected path where you would like it to be located. The old selected path will vanish and appear as the new path you just drew in.

You can now quickly select the remain paths one by one, and then redraw them in their new locations while holding down the e hotkey. 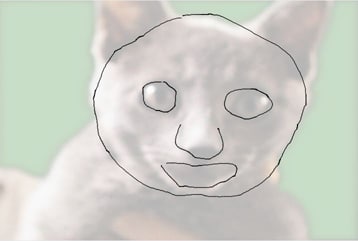 Once you have edited all of the old anchor paths to their new locations, option click a new keyframe in your Morph Context PASeq action step.

At this point you’ve defined a morph between 2 still images. The frame capture below shows the mid frame of the simple morph we defined in this example between the 2 face images. 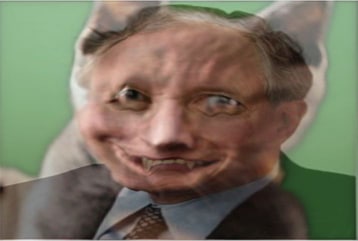 A Bezier morph animation example created using the same technique described above with a different starting source image is below: