The movie example ‘motion-drops1’ shown in the link below shows off a simple use of time particles in a paint animation.

This example was create using a 2 step Paint Action Sequence (PASeq) that will be detailed below.

A simple paint preset was edited to turn on time particles as shown below in the Time Particles 1 control panel in the paint synthesizer. 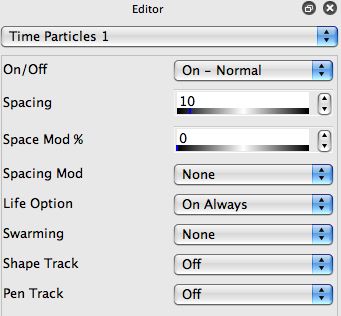 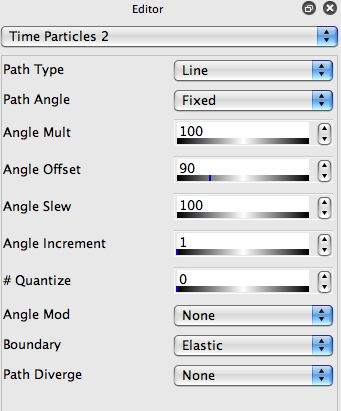 A common editing mistake is to turn on time particles wihtout setting a reasonable value for the Max Strokes parameter setting.  Many Studio Artist factory presets default with a max strokes setting of 40000. This is done so that when the action button is pressed the paint synthesizer will continue to draw for an indefinite time until a user manually stops action painting by pressing the space bar. 40000 time particles is an exceedingly large number of particles and each frame in an animation with this many particles would take a long time to render. 40 to 400 time particles are probably more reasonable numbers for a typical time particle paint animation. So remember to edit the Max Stroke parameter in the Path Start control panel with an appropriate # of particles before you build a PASeq or start an animation with time particles.

The screen snap below shows the 2 step PASeq used to create the motion-drops1 example.

The first action step used in the PASeq was created using the Geodesic Recursive Growth Image Operation. This action step processes the canvas with the feathering effect created by this particular Ip Op. The second action step is the AutoPaint paint synthesizer step that paints with the time particles. Note that the canvas background is not erased as the animation progresses, so each new output frame is created by painting on top of a feathered version of the previous output frame.

You can perform live parameter edits while the Studio Artist 4 paint synthesizer is running. This means that you have the ability to preview time particle behavior in real time and make editing changes while the time particles are moving. This can be a great aid to understanding how the individual time particle parameters control the particle movement over time.

The key to time particle preview or to live visual performance using time particles is to use Loop Action. Loop Action is a new feature in Studio Artist 4. It allows you to seamlessly loop any individual action. To start Loop Action, just run the Action : Run Loop Action menu command.

Once you have a paint preset that uses time particles running in loop action, you will be able to see the time particle animation proceed in real time as the action loops over and over again. You can then edit the individual time particle parameter controls (or any other paint synthesizer editable parameters) and observe how they influence the time particle movements and overall paint effects respectively.

Pen Track is a new parameter available in the Time Particle control panel. When turned on, the time particles will be attracted to the current pen position when the pen is in proximity. This is a useful way to interactively control and influence time particle positioning and behavior in a progressing animation. 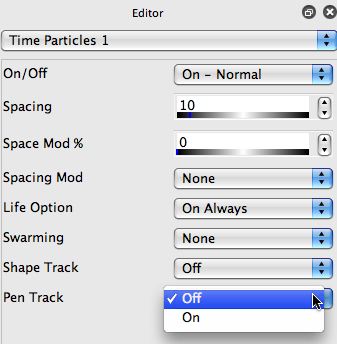 Pen Track works well when combined with particle Swarming. When Swarming is turned on there are additional parameters available that let you specify how individual particles attract or repulse. Think of the movement of individual birds or insects in an overall swarm and you’ll have an intuitive feel for the behavior of a swarm of particles. 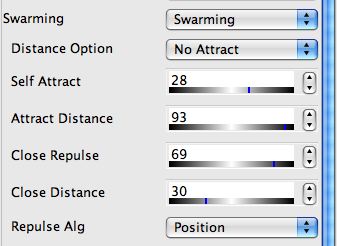 Just like in nature, a few simple rules to define the behavior of individual objects in a swarm can lead to highly complex movement effects over time. For example, Close Repulsion in a swarm can keep individual particles from getting too close to each other while they are attracted to the pen with Pen Track on. This can lead to chaotic circling movement where the individual particles swarm around the current pen position. Lifting the pen out of proximity can cause the particles to then fly apart until the pen is again brought into proximity, at which point the particles will again move towards the current pen position.

The link below shows off an example of live visual performance using time particles. By working with the pen and pen proximity as loop action animation was progressing i was able to interactively influence and somewhat control the movement of the individual time particles. Because of the interaction of the swarming and border bounce parameters each particle also has a mind of it’s own in the loop action animation. 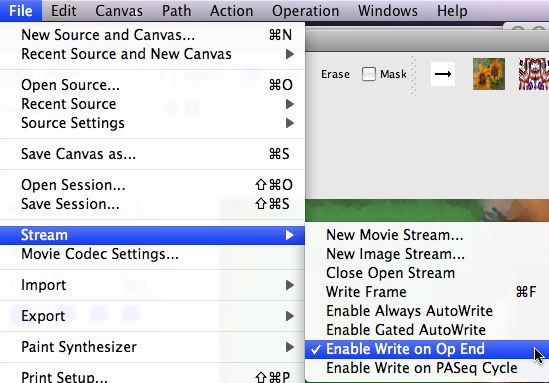 When i wanted to end the animation i just pressed the space bar to stop loop action. I then closed the open movie stream and had a finished movie file of the time particle animation.

Time Particles can reference their original start point locations as they move in an animation. This can be used to create animation effects that fracture an image apart (or vice versa). The way to do this is to use the Time Particle Start Point Tracking option in the Paint Source Offset control panel. A simple example of this kind of effect is shown below.

The Paint Source Offset controls in the paint synthesizer modulate the mapping between the spatial location of a paint stroke and the spatial reference for that canvas location in the source image. The Time Particle Start Point Tracking option means that no matter where a time particle moves in the canvas it will always reference it’s first frame source location.

To pass through the source image with no additional processing when painting, the following Paint Fill Setup parameters were used. 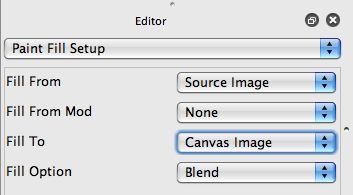 A Rectangular Grid Path Start Generator was used, so the first frame’s time particles were positioned on a grid spaced to fully cover the canvas. In subsequent frames they move based on the time path created by the Time Particle parameters in the paint synthesizer. A Polar Path Angle was chosen for the time particle movement to move the time particle paint nibs away from the center towards the edges of the canvas over time.

A simple example of this is shown below. 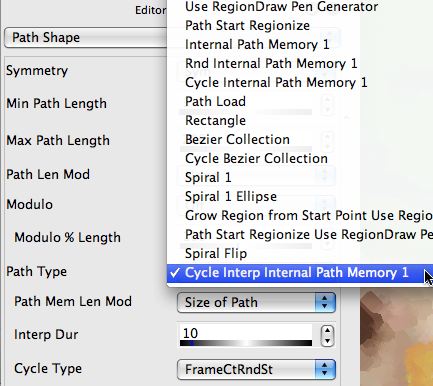 Introduction to the Paint Synthesizer

Working with a Wacom and Surface Pen and Tablet

Photo Mosaics Using Your Own Images