Temporal Image Processing operations are time based video processing effects that use the current source movie as a source for processing. This kind of effect assumes you have a loaded source movie or are processing a movie file. You can run them without a loaded source movie but nothing interesting will happen if you do so. This is because the individual effects work with multiple movie frames from different times to create effected output that is dependent on the individual input frame images changing in some way over time.

The above image was made with a movie made of 50 frames comprising of very different images that were previously effected in Studio Artist.

How to Create a Movie from a Folder of Images

Because temporal image operation effects work with multiple frames to generate a single effected output frame, they can be used to accent motion in a video sequence or to create single images from multiple frames like the above example.  There are several Temporal presets for video in the Paint Action Sequence presets that you can use on videos that effect the motion of video.

You can use Temporal Ip Op effects to amplify or suppress motion, to stretch or contract time in a video, to generate slit scan effects, or to convert video pans into static panorama imagery.

Stack Filtering is when you use several movie frames to create a single image.  The images above and below are examples of stack filtering.  This unconventional approach to time-based image processing is a way to automatically create some amazing unconventional visual effects.

The presets in the Temporal Image Operations are best used for this effect.  You just need to design your movie with interesting images and generally keep them below 50 images although please feel free to experiment.   With just one Temporal Image Preset you can get multiple results by just staring at different frames in the movie.  Also its pretty easy to tweak the editor to get different effects as well.  This post explains how to create the image folder movie here

You can also create PASeq using any of these Temporal Image Operations Presets as well to effects movies that are not a folder of images.  There is a category in the Movie PASeq presets that create amazing videos using the Temporal effects.

The example below was created with images that we very different and were previously effected in Studio Artist instead of raw photos.

Example of a temporal rank filter used as a stack filter

In the editor, the popup menu control at the top of the Editor lets you select the particular temporal effect you want to run.  All of these effects are time-based which means they take multiple movie frames from different times as their source and  perform some kind of processing where time is a component of the particular processing algorithm.

The bottom 3 parameters, Mix, Composite, and Composite Space are generic compositing parameters available for all of the different temporal ip ops. These have the same functionality as the equivalent generic parameters in other Studio Artist operations like Image Operations, Texture Synthesizer, MSG, etc. They control the effect output mix and compositing with the existing canvas layer image.

The Size and Frame Increment parameters are seen in many of the different temporal effects. Size refers to the size of the temporal frame window being used for the effect (how many frames are processed). The Frame Inc (increment) parameter refers to the number of frames advanced when moving from one input frame to another. So a Frame Inc of 2 would take every other frame, 3 would mean use every 3rd frame, etc. By increasing the Size and Frame Inc you would be processing more frames spaced further and further apart. The frame window specified by the Size parameter is usually centered around the current source frame unless there is a control that specifies something else.

The output of any given temporal effect can dramatically change depending on the size and frame spacing of the temporal processing window as well as what is happening visually in the frame images within the time window. Getting a feel for the different effects and what you can do with them requires some initial experimentation.

Be aware that some temporal ip ops will render slowly. This is especially true of the Slit Scan Complete and Time Axis Rotate Complete effects since they need to process all of the frames in the source movie. Increasing the size of the frame window being processed will also slow down a particular effect since more frames will have to be processed to complete the effect. There is a status message at the bottom right corner of the Status Area in the main Studio Artist window that will let you know if a temporal ip op is still processing frames.

You can always press the esc key if you think a temporal image operation is running too slowly and you want to stop it from processing.

Here are some examples of what can be generated with some of the different temporal effects.  Be aware that many of the filter effects may look radically different depending on which particular filter algorithm parameter you choose.  And as mentioned above, what is happening in the source video (motion, pans, jitter) you use as input to a particular effect will greatly influence whether the temporally processed effect output is interesting or not.

Some effects or effect settings are designed to accent motion in the source video frames.  Other settings may suppress motion from the effect output.  For effects like the Scan tracker or the Slit Scan, the interaction between the direction of the motion in the video sequence and the direction of the scan control in the effect can lead to interesting or chaotic processed output. Camera shake or pan movement will be processed as motion in a temporal effect and may lead to desirable or undesirable output depending on the particular effect you are running and what you hope to visually achieve with the effect.

All of the examples below have an example output based on the same source video sequence of a runner. Because this standard source video may not really be optimal for showing off the particular effect some other examples are also presented to show off what can be done with the proper video footage for these effects.  Generally if you want to output to a Still Image you should create a movie from a folder of Images of around 10 to 75 images.

Again this helps show off the fact that you need to develop a feel for how the motion of other characteristics in your source video interact with a particular effect and it’s internal parameters to build different style temporal effects. As always, there’s nothing like some experimentation with different settings to help develop tis understanding, and you may sometimes stumble upon interesting combinations of video motion and effect settings that lead to new and interesting results.

All of the following movie examples were created with Studio Artist Factory PASeq presets.

Computes a simple frame difference effect. You could think of this as being like a motion edge effect, where the brighter a pixel the more motion is associated with it. Not the most visually interesting effect, but a Src Movie Frame Difference modulator based on this effect is available in many Image Operation effects and this can be very useful for spatially modulating an image processing effect based on motion.

Good at rendering the motion happening within the processed frame window in a single frame. Tends to work best if the camera is stationary without jitter and objects are moving in the camera view.

You could think of this as a temporal orientation where the resulting effect output encodes the angle of movement in the frame.  Also works well as a video motion edge effect.

Reorders the frames in the video sequence. Can be used to reverse the entire sequence or generate local stutter reversal or randomization.

Rank filters the motion in the video sequence. 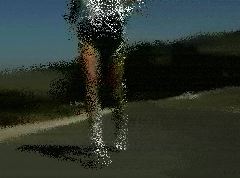 The temporal equivalents of some of the Rank Filter Image Operations. Rank filters are nonlinear filters. Depending on the particular algorithm you use the effect can change dramatically. Can be useful for representing or slowing down motion in a video sequence as well as creating bizarre special effects. 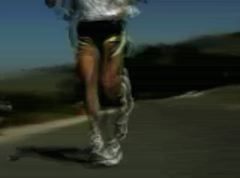 Looks at a spatio-temporal neighborhood for each pixel and extracts a rank ordering based on spatial energy. So it’s a way to output the maximum or minimum energy details in the frame window being processed. Can be used to accent or diminish motion in a video sequence, or to create fascinating stack filter effects that provide super edge effects or severe averaging across the stack of images being processed. 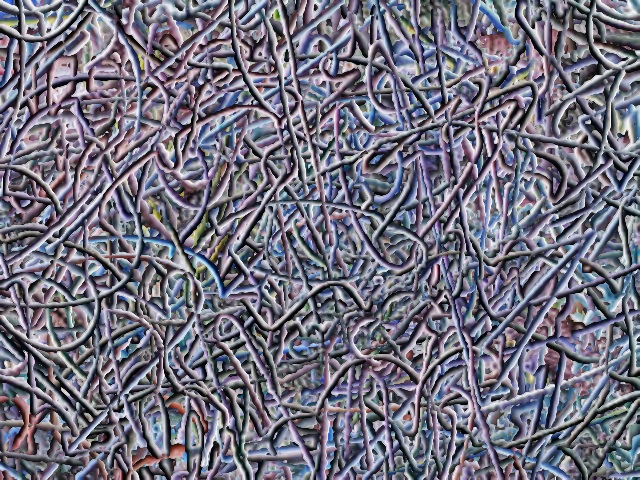 Similar to the Simplify Image Operation effect, but works it’s magic over multiple frames. This can lead to simplified cartoon style processed video output that has less flicker from frame to frame. The following uses T-Simplify to simplify the image and then adds T-Diff and a T-Scan Effect

Panorama generated from a video sequence.

Simulates scanning a slit across the complete sequence of video frames. This can be used to get an overview of what is happening in the complete video sequence as shown above or to freeze motion in the direction of the scan. 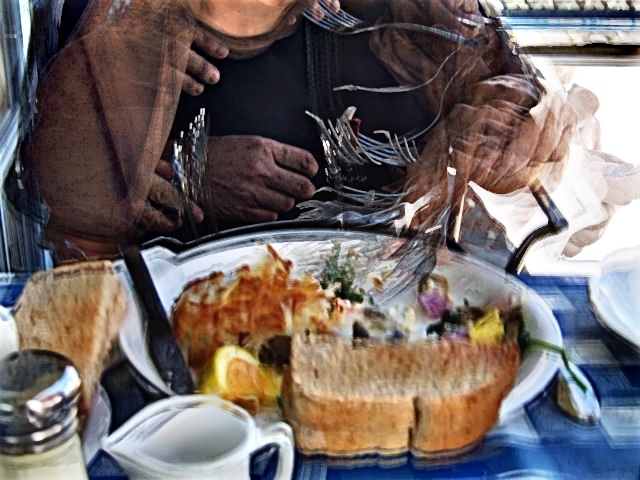 Vertical slit scan of video footage of someone eating. Note the interaction of the scan direction and the direction of the motion, which was chosen for optimal effects results.

If you think of a video sequence as a 3D cube, where the z-axis represents time, then this effect rotates the spatial-temporal video cube so that time has been shifted to be in the plane of the 2D view. Can create some really ethereal images or video special effects.

A tutorial tip on how to process an entire movie file with a temporal image operation effect is available here.

Introduction to the Texture Synthesizer

Introduction to the Vectorizer