Movie Layers replace the old Studio Artist loaded canvas movie features. Movie layers can be used to build up animation frame by frame or to hand paint on individual frames of a movie file. This tip will discuss how to work with the new Movie Layer features in v4.

When you paint or otherwise process a movie layer, the editing changes are being made to the image frame buffer associated with the layer. The changes are not actually recorded into the associated movie file until you record the changes. You can use the R (record) button in the movie layer transport to overwrite the current frame in the movie file with the contents of the movie layer’s frame buffer. Shift clicking the R button will insert a new frame as opposed to overwriting the existing frame.

You can also use the Canvas : Movie Layer editing menus to perform movie edits like record over a frame,  insert a new frame, delete a frame, etc. 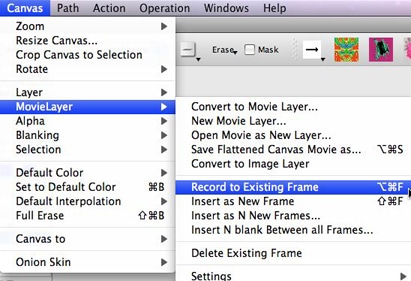 The new frames are also not time compressed in any way since we need to add newly recorded frame edits as image frames to avoid problems associated with adding arbitrary frames to some image compression codecs.  Because of this, you may wish to generate a flattened movie file after you are finishing editing. A flattened movie file will only contains the actual media frames used in the final movie and the frames will also be time compressed based on whatever is your current movie compression codec.

There’s an additional onion skin toolbar that can be displayed in the layer palette when working with movie layers. The controls are associated with the Canvas Movie Onion Skin option, and will not appear it that is not the current Onion Skin Type. 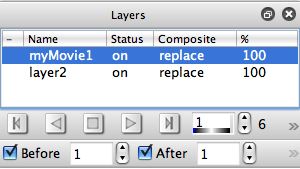 To make it accessable, you need to set the Canvas Movie Onion Skin Toolbar preference to ‘in Layer Palette’. 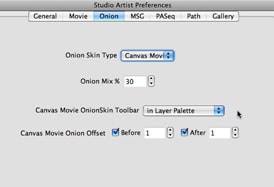 An onion skin refers to a semi-transparent guide image. You can adjust the onion skin transparency using the Onion Mix % preference. Onion skins are useful to use as drawing guides when creating hand drawn animation.

Movie Layers in Depth
Working With Alpha Channels in Layers