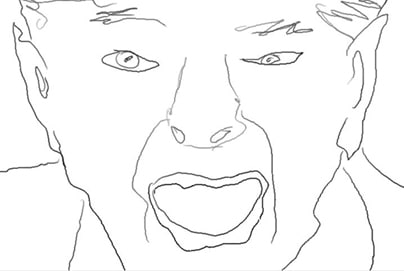 This tip discusses how to create a keyframed paint animation from a series of freely sketched pencil sketches. Each sketch can have an arbitrary number of pencil strokes. Each sketch is encapsulated into a single paint action step recorded in a Paint Action Sequence (PASeq). The final animation is generated by animating the keyframed single step PASeq into a movie file. By working with keyframes as opposed to hand drawing each frame in the animation you can generate a completed animation in a fraction of the time it would take to draw each frame manually.

The source onion skin is a useful feature that can be used as an aid when manually sketching a source image. I used a source onion for all of my keyframed sketches in this example.

To start, load the source image you want to use as your first sketch. Make sure the canvas is the size you want it to be for your animation.  You can either do this by using the File : New Source and Canvas menu to load your source image and resize the canvas in one step, or you can use the Canvas : Resize Canvas menu.

Nw choose the paint preset you will be drawing with. I used the Default : Pencil : Round1 paint preset, which draws like a soft graphite pencil.

Make sure the paint preset you are working with does not have any path randomization. You can check this by going to the Path Randomize control panel in the Editor palette and making sure both Displace options are set to None. Path randomization interferes with the Bezier path conversion process, so you should avoid it if working with Bezier encapsulation.

Erase the canvas before drawing to white. You want to make sure you do a full erase, so make sure the default color is set to white and then shift click the erase button in the main operation toolbar. Shift clicking erase runs a full erase, which also erases the Bezier path frame for the layer in addition to erasing the raster frame buffer to the default background setting (white in this case).

Now draw a simple free sketch of the source image. Only what you draw will show up in the final sketch, the onion skin is there for a guide only. When you are finished sketching you can turn the onion skin off (run the Toggle Onion Skin menu discussed above).

Switch back to paint synthesizer operation mode. make sure you haven’t changed the paint synthesizer from the preset you were using for your sketch drawing. We’re now ready to encapsulate the recorded Bezier path frame into a single pain action step.

To encapsulate the recorded Bezier paths in the Bezier path frame into the current paint synthesizer preset, you run the Path : Convert to Paint Synthesizer : as AutoDraw Embedded Bezier Frame menu.

This menu command captures the contents of the current Bezier path frame into the internal Bezier memory in the paint synthesizer. It also runs a paint synthesizer macro edit that configures it’s editable parameters so that it will play back the paths stored in it’s internal path memory.

Now we’re ready to record the encapsulated paint preset in a Paint Action Sequence. Open the PASeq palette and erase it’s contents by pressing the erase button in the toolbar at the top of the PASeq palette. Turn on recording by checking the record checkbox in that same toolbar. Then press the action button. The encapsulated paint step should now playback your sketch and a single paint action step should record in the PASeq. Turn off PASeq recording by unchecking the record checkbox.

I prefer to record adjacent keyframes, and then use the Action : PASeq Timeline : Time Compress/Expand menu command to expand the timeline when i have finished recording all my keyframes.

Generating an animation movie from your recorded keyframes

Since i wanted to have the PASeq erase the canvas first for each frame and then draw the sketch, i recorded a second PASeq action step that sets the background to white. I did this by turning on PASe recording, pressing the erase button, turning off PASeq recording, and dragging the recorded Set Canvas- White action step to the top of the list.

The screen snap below shows my finished PASeq for the animation. I recorded 4 keyframes associated with 4 sketches. I wanted to have 10 frames between each keyframe, which leads to a total of 31 frames in the animation, since keyframes are recorded at frames 1,11,21,31.

At this point you can generate an animation movie from your recorded PASeq. To do this you run the Action : Animate with Paint Action Sequence : to Movie menu. This menu will ask you to name the generated movie file and will then run the animation rendering the frames out to that movie file.

If you just want to preview the animation without rendering it to a movie file you can just press the Animate button in the PASeq toolbar. You can always use the spacebar to stop an animation or a rendering movie process.

If you now watch the generated animation movie you will notice a few problems associated with it.  The animation between keyframes will not appear to be smooth, and there will be abrupt jumps at keyframe points where paint strokes jump into or out of existance.

There are 2 reasons for the problems associated with the animation. The first is that each keyframe was recorded with an arbitrary number of sketch strokes. But to have a smooth animation we would want to have the same number of paint strokes for each sketch. The second reason is that the stroke transitions between keyframes are totally arbitrary, when ideally we would want spatially adjacent paint strokes in adjacent keyframe times to interpolate.

The solution to both of these problems is to run some Action : PASeq Timeline menu commands on our recorded PASeq prior to rendering out the final animation. The first menu to run is the Action : PASeq Timeline : Embedded Bezier Frame : Normalize Split menu. Both normalize command options insure that each keyframe in the PASeq timeline has the same number of embedded bezier paths. Normalize Split splits the longest paths to normalize the path count. Normalize Recycle duplicates paths.

Watching each of these 3 animations should give you a feel for what the various processing steps do.

If you want to create even smoother animation, you can break your sketch up into parts and record each part as a separate PASeq action step. Each of the action steps will have associated keyframed encapsulated Bezier paths. For a face ketch, you could break the sketch up into action steps for each of the facial components (eyes, nose, mouth, hair). Building the sketch this way insure that the keyframe interpolation will only be associated with the transformation of each facial part and not transforming between parts, leading to smoother automatic motion of the component paint strokes.

You can also generate alternative keyframed Bezier animations based on various automatic path generation operations, like generating the sketch paths from the source edges. One advantage of this kind of approach is that there’s no manual drawing, the entire process used to generate the animation is fully automatic. There’s a tip that describes how to do this in more detail.