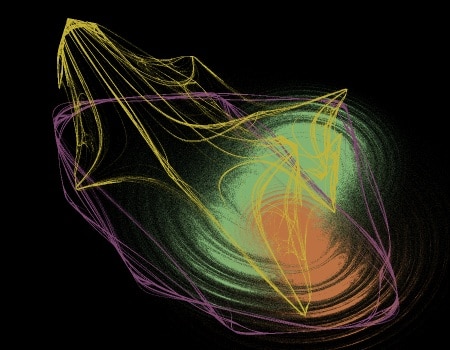 There are a number of different MSG processors that can generate chaotic attractors. These presets typically generate a single channel black and white image. A simple example of a 2 processor MSG preset that generates a black and white attractor image is shown below. 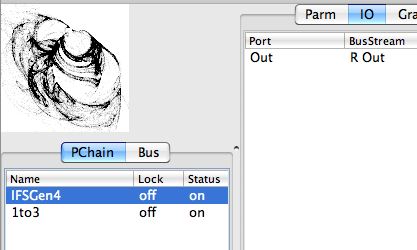 The first IFSGen4 processor is generating the 1 channel black and white chaotic attractor image. Note that it has a single ‘Out’ IO port that is connected to the ‘R Out’ image stream. Since a MSG preset generates a RGB output image, we need to map the chaotic attractor output to all 3 output color channels. A ‘1to3’ processor is used to do this as shown below. 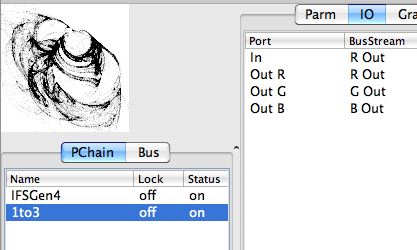 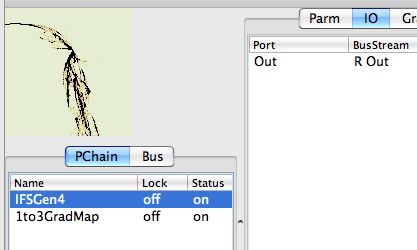 Note that the first step in this preset is the same as the black and white example we started with. The ‘Out’ IO port for the IFSGen4 processor is connected to the ‘R Out’ image stream. The screen shot below shows the IO connections for the second ‘1to3GradMap’ processor. 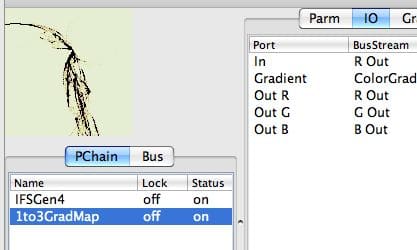 More complex images can be created by combining together different chaotic attractors that are each rendered in different colors in a single output image. The first image  at the top of this post shows off an example of this kind of multiple attractor colorized output. The screen snaps below will show off how to build up this kind of colorized multi-attractor image. 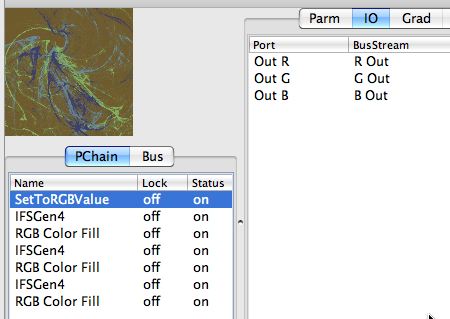 The MSG preset shown above generates 3 different colorized chaotic attractors placed on top of a color background. The first ‘SetToRGBValue’ processor generates the flat color background. You can see that it’s 3 RGB output ports are connected to the main RGB Out image streams. 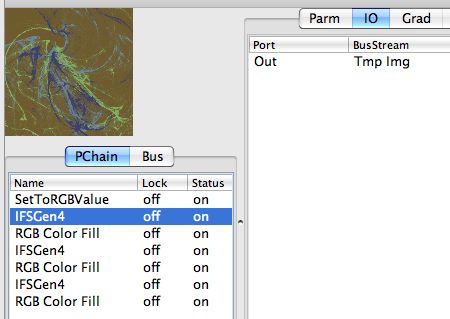 The 3 IFSGen4 processors are generating the 3 chaotic attractors used in the final output image. Remember that this kind of chaotic attractor processor generates a single black and white output channel. Since we are building the final output image in the 3 RGB Out image streams, we set the Out IO port for the IFSGen4 attractor output to connect to a temporary image stream buffer called ‘Tmp Img’. This insures that we can use the attractor output image as an alpha matte in the next step without overwriting and destroying our existing color output in the RGB Out streams. 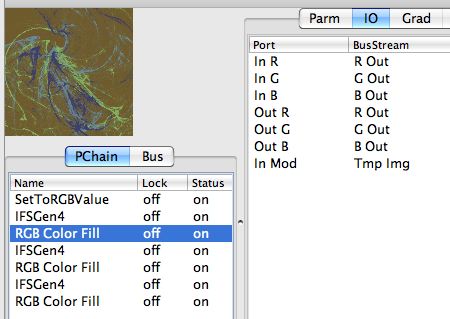 The ‘RGB Color Fill’ processor is then used to composite a colorized version of the attractor output into the RBB Out image streams. If you look at the IO connections above for this processor you can see that the ‘Tmp Img’ stream we placed the attractor output into is used as the ‘In Mod’ port for this processor. This modulation input is used as an alpha channel to composite a solid color into a 3 channel color image. Note that we use the same 3 IO channels for the color input and output, the main RGB Out image streams. This is because we are using these 3 image streams to build up our color output image. 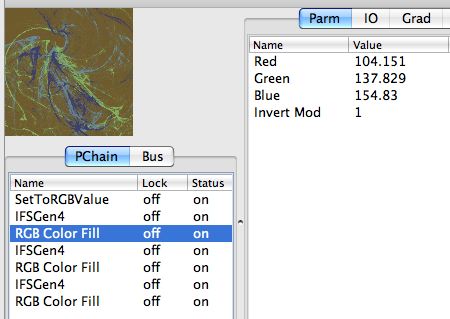 The parameter values for the ‘RGB Color Fill’ processor are shown above. Note that the first 3 parameters specify a specific color. This is the color that will be alpha matted into the 3 channel output image. Setting the ‘invert Mod’ parameter to 1 means that the ‘In Mod’ modulator image stream is inverted and then the inverted image is used as the alpha matte.

The 2 steps of generating a black and white attractor image in the ‘Tmp Img’ image stream and then using that image as an alpha matte to matte in the attractor as solid color are repeated 3 times in the overall preset. This generates a final output image with 3 different attractors matted in with 3 different colors in the final output image. You could use as many different attractors and colors as you wished to build up your final image.

Another attractor coloring strategy is to associate each attractor with a specific color image that is then used as the coloring for alpha matting based on the attractor. So instead of matting a solid color like in the example above you use the attractor to matte a color image. The MSG preset below shows off one example of this kind of coloring approach. 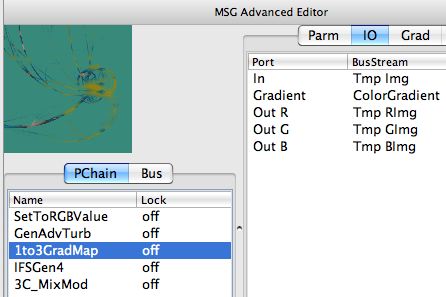 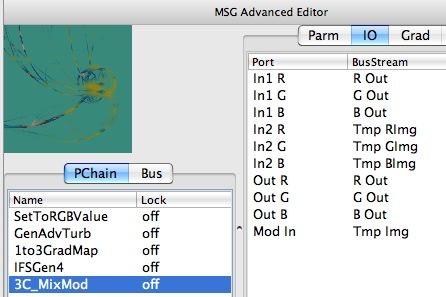 The IFSGen4 processor is then used as in the previous example to generate a 1 channel black and white attractor image in the ‘Tmp Img’ image stream. This black and white attractor image is then used to modulate the 3C_MixMod processor. The 3C_MixMod processor alpha mattes a color image as opposed to the RGB Color Fill processor used in the previous example which matted a solid color.

The IO connections for the 3C_MixMod processor are shown above. Note that the main RGB Out image streams are used to build up the final output image. The Tmp RImg, Tmp GImg, Tmp BImg streams are used as the source of the random color image that is alpha matted by the image specified for the Mod In Port, which is the ‘Tmp Img’ image stream used for the IFSGen4 chaotic attractor output. 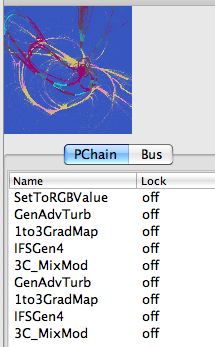 Erasing the Canvas and Setting the Canvas to the Source Image
January 3, 2016
Introduction to MSG
October 22, 2015
Improving Edge Rendition in a Painting
October 21, 2015

Getting Started with Digital Painting
February 3, 2015