This tip focuses on some simple editing strategies for generating coloring effects in abstract imagery created with MSG presets. A color MSG output image consists of 3 image Streams (R Out, G Out, B Out). RGB stands for red-green-blue.

Each image stream in a MSG preset is a monochrome image. So generating a color output means that 3 image streams need to be generated. There are many different editing strategies that can be used to create a color image and we’ll run through a few examples below. All of the examples shown will use the same simple monochrome texture field created by the AdvTurb processor. The screen snap below shows the io routing for the AdvTurb processor, which takes the R Out stream as its input and output. 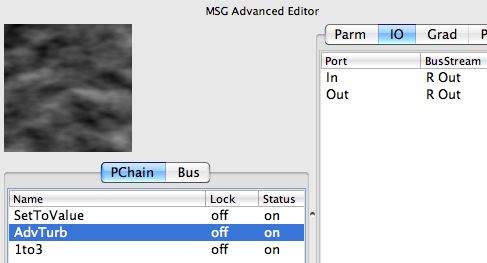 AdvTurb is short for advanced turbulence.  This processor can generate a wide variety of different procedural texture fields.  It also has an input io port which can be used to locally modulate different parameters associated with the texture field generation process.  The SetToValue processor is just creating a flat color image in the R Out stream which would be the simplest modulator possible to use as an input modulator for the AdvTurb processor. 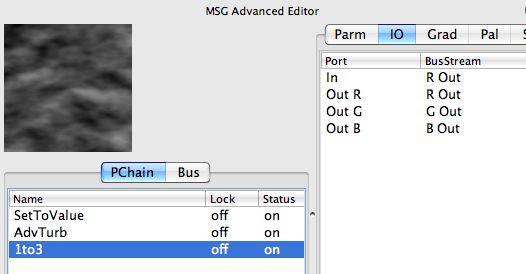 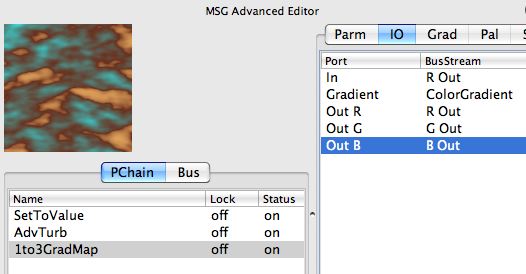 Gradient or palette mapping a monochrome image is a common technique to take a black and white monochrome image and turn it into a color one. Each has a characteristic aesthetic look to it. 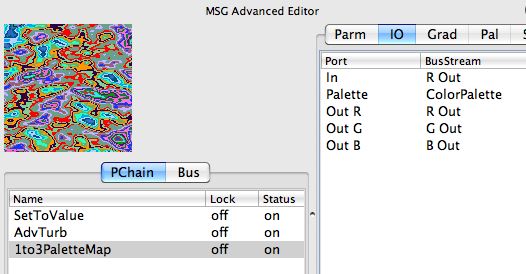 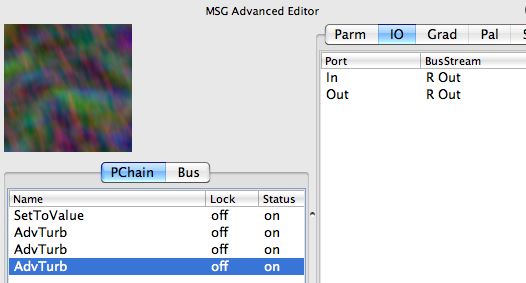 An alternative to mapping a monochrome image into a color one is to generate 3 different monochrome images, one for each of the 3 color streams in the output color image. The preset above shows a simple example of this approach. Notice that there is a characteristic look to the end result. The technique shown next is a way to take this basic strategy and make it more visually appealing. 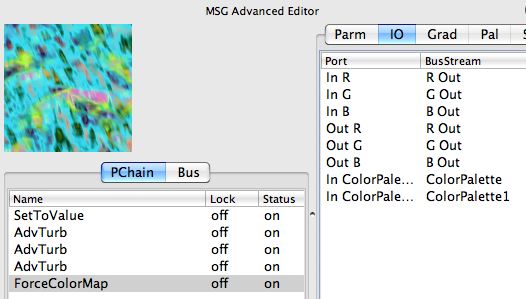 There are a number of different MSG processors that take a color input and then colorize it using 1 or more color palette or gradients. These processors are very useful for generating more appealing colorings for abstract artwork generated using MSG. The ForceColorMap processor is being used for this purpose in the example above. This processor takes 3 image input streams and 2 color palette input streams and then generates 3 output streams. Note how the visual appearance and aesthetic of the previous example has been radically modified by this ForceColorMap processor.

There are a number of different SmoothColorMap and ForceColorMap processors that can be used as described above to recolorize a color image. Some base their coloring on color palettes and others on color gradients. Some are also configured so that they can generate 2 different colors in different local areas in the output image based on another modulator input stream. 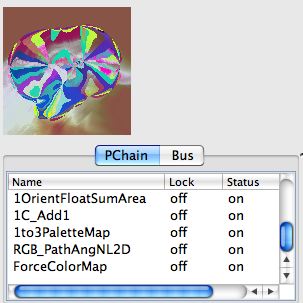 This example also shows how a little select manual editing after a round of directed evolution can help clean up any potential problems or hone in a particular artistic style.